Comic book movie Black Panther has won the biggest prize of the night at the Screen Actors Guild Awards, where British hopefuls were mainly left empty-handed.

The superhero juggernaut, which was a global smash hit at the box office, took the prize for best ensemble cast in a motion picture, the ceremony’s version of the best picture gong.

Chadwick Boseman, who plays the title role, collected the gong alongside co-stars including Michael B Jordan, Lupita Nyong’o and Danai Gurira.

BLACK PANTHER DOES IT! They take home the Actor®#sagawards pic.twitter.com/zZncxS8M6d

Addressing if the film has changed the industry, he said: “My answer to that is…to be young, gifted and black.

“Because all of us up here know what it’s like to be told there is not a place for you to be featured yet you are young, gifted and black.

.@theblackpanther takes home the Actor® for Outstanding Performance by a Cast in a Motion Picture! #sagawards 🎭

“We know what it’s like to be the tail and not the head, to be beneath and not above and that is what we went to work with every day. We knew that we had something special that we wanted to give the world.”

The lone British winner was Emily Blunt, who scored the best supporting actress prize for her role in A Quiet Place, which was directed and co-starred her husband John Krasinski. 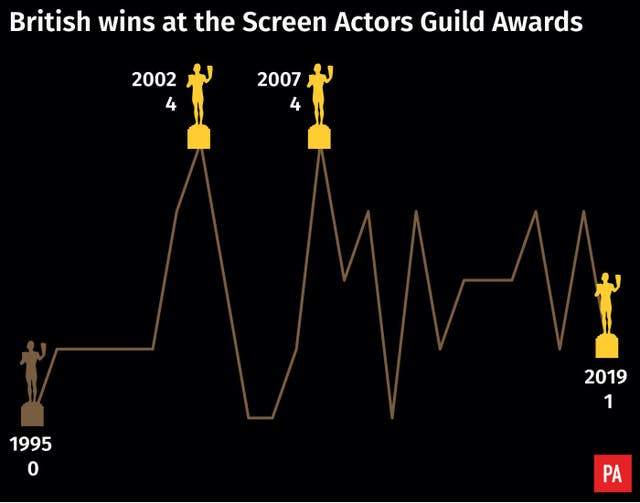 Visibly shocked as she collected her gong, she said: “Oh my goodness me. Guys, that truly has completely blown my slicked hair back.

“Thank you so so much, I’m so moved and completely lost for words and unprepared.

“I am going to share this completely with my husband, John Krasinski, because the entire experience of doing this with you has completely pierced by heart directly, you are a stunning filmmaker.

“I am so lucky to work with you and to have done this film with you, thank you for giving me the part, you would have been in major trouble if you hadn’t so you didn’t really have an option.”

She also paid tribute to their two daughters Hazel and Violet, who she referred to as the “little poems in our lives” and joked they would have to be 45 before they could see the film.

Mahershala Ali took home the gong for outstanding performance by a male actor in a supporting role for his part in Green Book, beating out British hopeful Richard E Grant.